The teaching and research institute covers approx. 276 ha of usable agricultural land (114 ha of arable land and 162 ha of permanent pastures) with an extensive animal population of pigs, cattle, sheep and poultry, and is managed on a conventional basis. The animal population is partially included in long term research programmes for the fulfilment of the research tasks.

At the same time, the institute also serves the purpose of providing training in the fields of agricultural sciences, animal sciences, veterinary medicine etc., and the Obere Hardthof is also an educational centre for the professions of 'animal husbandry' and 'farmer.'

In 2011, the restructuring of the teaching and research centre began. In addition to wide ranging infrastructure investments, a strong boost for pig farming has also been made. Since then, the old pig stables have been removed, a new grain storage hall and a pig rearing stable including piglet breeding facilities for 112 productive sows in a three week rhythm have been constructed. A fattening stable is also planned for approx. 1,000 animals which means the pig production would run in a closed system.

The feeding technology for the pig stables was a key element for the operators from the start. In addition to the feeding of the pig population, as we are familiar with it from agricultural practices, the production of a wide range of different feed mixes for the cattle, sheep and poultry also formed part of the requirements profile concerning the feeding technology. At the same time, it was also necessary for additional feeding experiments to be carried out for the University's research work, with the highest levels of precision and an absolute freedom of mixing being decisive. It very rapidly became clear that the Schauer Spotmix system is best placed for managing these different tasks.

In an intensive project development phase, all of the requirements of the responsible persons at the university, the Oberer Hardthof agricultural business and the Schauer specialists were defined and then flowed into a conclusive system concept. The so-called main Spotmix system is housed in the grain hall and supplies the entire pig population (including the fattening stable that remains to be constructed), and produces feed mixtures for the other animal species during the breaks in feeding as well as special mixtures for the feeding experiments.

The feeding experiments in the areas of farrowing, piglet breeding and the future fattening are completed in three "mini" Spotmix systems each consisting of four base stations. The base mixture for each part of the experiment (produced by the main system) can therefore be transported completely free of carry-over with up to four experimental components which are introduced via 20 l small volume dosing units, mixed, and then taken to the individual feed valves in the experimental area. This technical configuration will enable the university to achieve a new quality in terms of the completion of its experiments in the future.

Subsequent to the completion of the system, the animal population will be developed on a continuous basis without buying new animals in order to maintain a very high health and hygiene status from the start. 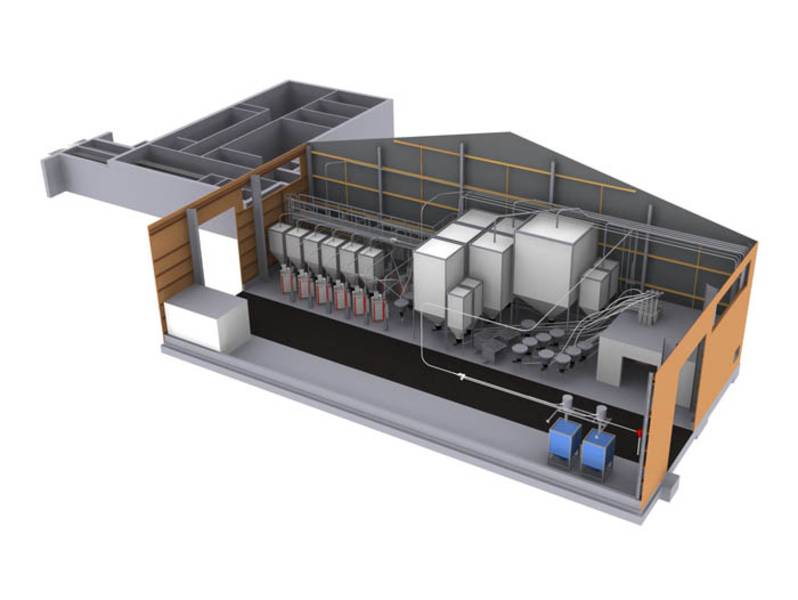